Exercises 1–2: What Is Random?

b. The results are different because when we generated the sequence, we did not have a lot of heads or tails in a row.
c. She could try, but she would probably not have some of the characteristics that a real set of random numbers would have, such as three consecutive numbers or four even numbers in a row.

Exercises 3–11: Length of Words in the Poem “Casey at the Bat”

Exercise 4.
Look at the poem “Casey at the Bat” by Ernest Thayer, and select eight words you think are representative of words in the poem. Record the number of letters in each word you selected. Find the mean number of letters in the words you chose.
Answer:
Answers will vary. Sample response: The words their, while, thousand, ball, bat, strike, muscles, and grow would have a mean of 5.25 letters.

Exercise 5.
A random sample is a sample in which every possible sample of the same size has an equal chance of being chosen. Do you think the set of words you wrote down was random? Why or why not?
Answer:
Answers will vary. Sample response: I thought it was random because I tried to use some little words and some long ones.

Answer:
Organize the responses in a table posted in the front of the class. Have students add their means to the poster. Consider the following example:

Question 1.
Would any of the following provide a random sample of letters used in the text of the book Harry Potter and the Sorcerer’s Stone by J.K. Rowling? Explain your reasoning.
a. Use the first letter of every word of a randomly chosen paragraph.
b. Number all of the letters in the words in a paragraph of the book, cut out the numbers, and put them in a bag. Then, choose a random set of numbers from the bag to identify which letters you will use.
c. Have a family member or friend write down a list of his favorite words, and count the number of times each of the letters occurs.
Answer:
a. This is not a random sample. Some common letters, like u, do not appear very often as the first letter of a word and may tend to be underrepresented in the sample.
b. This would give you a random sample of the letters.
c. This would not be a random sample. He might like words that rhyme or that all start with the same letter. The list might also include words not in the book.

Question 3.
Consider the two sample distributions of the number of letters in randomly selected words shown below: 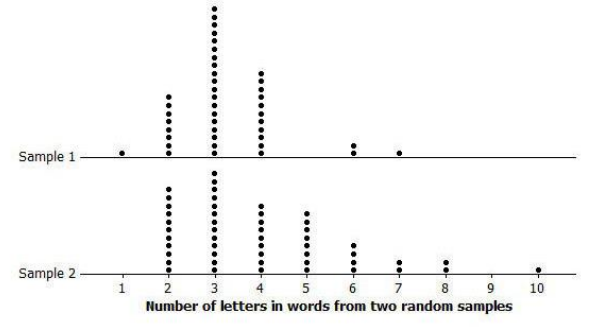 a. Describe each distribution using statistical terms as much as possible.
b. Do you think the two samples came from the same poem? Why or why not?
Answer:
a. Answers will vary; the top distribution seems to have both a median and balance point, or mean, at 3, with a minimum of 1 letter in a word and a maximum of 7 letters. Most of the words in the sample were 2 to 4 letters long. The bottom distribution seems more skewed with the median of about 4 letters. The smallest number of letters was 2, and the largest was 10 letters. Most of the letters in this sample had between 2 and 5 letters.

b. Sample response: The samples could have come from the same poem, but the distributions seem different both with respect to shape and to measure of center, so it seems more likely that they were from two different populations.

Question 4.
What questions about samples and populations might you want to ask if you saw the following headlines in a newspaper?
a. “Peach Pop is the top flavor according to 8 out of 10 people.”
b. “Candidate X looks like a winner! 10 out of 12 people indicate they will vote for Candidate X.”
c. “Students overworked. Over half of 400 people surveyed think students spend too many hours on homework.”
d. “Action/adventure was selected as the favorite movie type by an overwhelming 75% of those surveyed.”
Answer:
a. Sample response: How were the people selected? How many people were surveyed? What were the choices, and how many did not like Peach Pop?
b. Sample response: How was the sample chosen? Were the people selected at random, or were they friends of Candidate X?
c. Sample response: Who was surveyed, and how were they selected? Was the survey given to students in a school?
d. Sample response: Was the survey given at a movie theater showing an action/adventure movie where people were there because they like that kind of movie?

Question 1.
Write down three things you learned about taking a sample from the work we have done today.
Answer:
A random sample is one where every element in the set has an equal chance of being selected.
When people just choose a sample they think will be random, it will usually be different from a real random sample.
Random samples are usually similar to the population.