An Angle is the basic concept of Geometry and it is hard to understand geometry without a grip on Angles. Based on the measurement of an angle, the angles are classified into different types. Find detailed notes on the concept of the angle for free on our page. We have given clear details of the Classification of Angles along with solved examples. Get all Lines and Angles Problems for free of cost and improve your preparation level.

There are six different types of angles explained below.

From the above figure, ∠ABC represents an acute angle as it consists of less than 90º.
∠ABC < 90º

When the angle is equal to 90°, then it is called a right angle.

From the above figure, ∠XYZ represents the right angle as it consists of 90º.
∠XYZ = 90º

An Obtuse Angle is an angle when the angle is between more than 90° but less than 180°.

An angle which is equal to 180° is called a straight angle.

From the above figure, ∠AOB represents the Straight angle as it consists of 180º.
∠AOB = 180º

An angle that consists of more than 180° but less than 360° is called a reflex angle.

From the above figure, ∠BAC represents the Complete angle.

1. The figure shown below is of a straight angle, ∠XOY. Find the missing angle in the given figure? 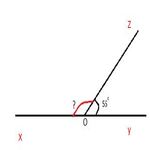 2. Mention the types of triangles with respect to the angles?

Based on the different angles, the triangles are classified into 5 types. They are the Obtuse Triangle, Right Triangle, Acute Triangle, and Equiangular Triangle.

3. What is an Equilateral Triangle?

An equilateral triangle consists of the same length of sides and has the same measure angles of 60°.