The first and important solid figure everyone discusses Cube. A cube is defined as a slid box-shaped that has six identical square faces. One solid figure that called a cube must consist of 6 equal and plane surfaces they appear as a square in shape.

A cube consists of 6 plane surfaces, 8 vertices and, 12 edges. There are two adjoining planes available in a cube which are called surfaces that meet at an edge. Also, it consists of 12 edges that are equal in length. These edges are straight edges. Furthermore, the joining point of two corners called a vertex. In a cube, there are 8 such vertices available. 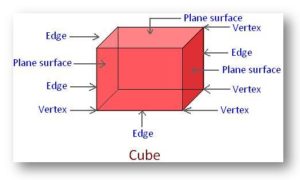 Parts of a Cube

(i) Face: The sides of a cube are known as the Face of the cube. A cube consists of six faces. All the faces of a cube are square in shapes. Each face of a cube has four equal sides.
(ii) Edge: When two edges join each other with a line segment, then that corner is called the edge. The cube has 12 edges. All the 12 edges are equal in length as all faces are squares. These edges are straight edges.
(iii) Vertex: A point formed with the joint of the three edges is known as a vertex of a cube. There are 8 vertices in a cube.
(iv) Face Diagonals: Face Diagonals of a cube is the line segment that joins the opposite vertices of a face. There are 12 diagonals in the cube that are formed with 2 diagonals in each face altogether.
(v) Space Diagonals: Space diagonals of a cube are the line segment that joins the opposite vertices of a cube and also cutting through its interior. There are 4 space diagonals in a cube.

Properties of a Cube

The cuboid consists of 6 rectangular faces which form a convex polyhedron. The opposite rectangular plane surfaces are equal. It has 8 vertices and 12 edges.

A cuboid consists of 6 rectangular plane surfaces. There are 8 vertices and 12 edges. All the faces of a cuboid are equal and square. Therefore, a cube has all the six faces equal, whereas a cuboid has the opposite faces equal.

Properties of a Cuboid

A cylinder has 2 plane surfaces and 1 curved surface. There are 2 edges and no vertices. Furthermore, the top and bottom of the cylinder are of the same shape as well as in size. They both are equal. 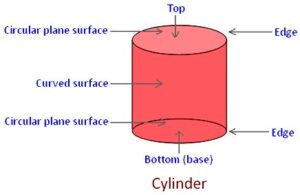 A cone is a distinctive three-dimensional geometric figure that has one plane circular surface. It consists of a base and only one curved surface. There are 1 edge and 1 vertex present in the cone. The edge of the cone is a curved edge. It is formed by the circular plane surface meeting with the curved surface.

A sphere is a geometrical figure that has a ball-like shape. There is only one curve surface present in the sphere and no edge and no vertex present in it.