Exercise 1.
What might explain the variability in the number of Tootsie Pops that the 94 people were able to hold?
Answer:
Answers will vary. Possible answers include the size of people’s hands, handspan, and whether a person is flexible in moving his fingers.

Exercise 4.
Here is Jayne’s description of what she sees in the box plot. Do you agree or disagree with her description? Explain your reasoning.
“One person could hold as many as 42 Tootsie Pops. The number of Tootsie Pops people could hold was really different and spread about equally from 7 to 42. About one-half of the people could hold more than 20 Tootsie Pops.”
Answer:
You cannot tell that they are evenly spread—the “box” part of the box plot contains about half of the values for the number of Tootsie Pops. However, the box is only four units long. That means half of the people were bunched over those four numbers.

Exercise 5.
Here is a different box plot of the same data on the number of Tootsie Pops 94 people could hold.

a. Why do you suppose there are five values that are shown as separate points and are labeled?
Answer:
Maybe because they are far away from most of the other values. It shows that more than half ofthe data an from about 12 to 27 Tootsie Pops.

The maximum speeds of selected birds and land animals are given in the tables below. 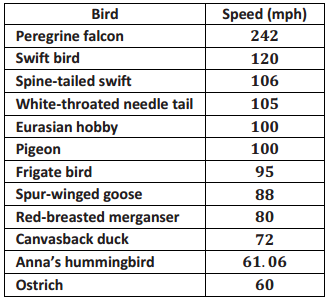 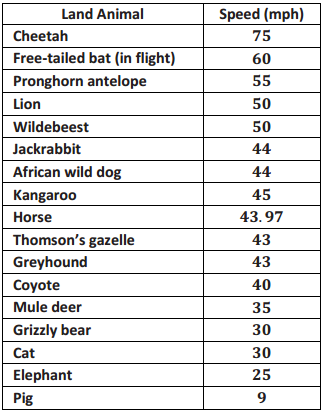 Exercise 6.
As you look at the speeds, what strikes you as interesting?
Answer:
Answers will vary. Some students might suggest birds are really fast, especially the falcon. Others may notice that only two of the speeds have decimals. The speeds of specific animals might strike students as interesting.

Exercise 9.
Use the five-number summaries to make a box plot for each of the two data sets.

Exercise 10.
Write several sentences describing the speeds of birds and land animals.
Answer:
Answers will vary. At least one bird flies really fast: the falcon at 242 mph. Three-fourths of the birds fly less than 106 mph, and the slowest bird flies 60 mph. The land animals’ running speeds are slower, ranging from 9 mph to 75 mph. The middle half of the speeds for land animals is between 32.5 mph and 50 mph.

Consider the following box plots, which show the number of correctly answered questions on a 20-question quiz for students in three different classes. 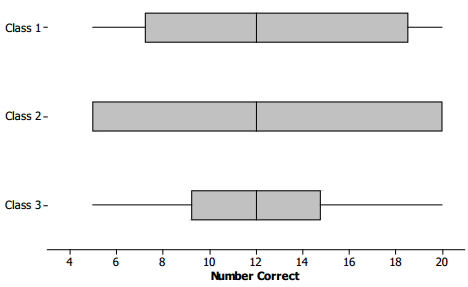 In Class 2, the minimum and lower quartile are the same scores, and the maximum and upper quartile are also the same score, so lots of scores are piled at the ends of the range. The middle half of the scores in Class 1 are spread out more than Class 3 but not as much as Class 2.

Teacher Note: The box plot for Class 2 may be difficult for students to interpret at first. If they have trouble, consider discussing the example provided earlier in the teacher flotes that shows how it is possible that the minimum and the lower quartile might be equal and how the upper quartile and the maximum might be equal.

b. What fraction of students would have scores In the interval that extends from the lower quartile to the upper quartile?
Answer:
About one-half.

Exercise 15.
A teacher asked students to draw a box plot with a minimum value at 34 and a maximum value at 64 that had an interquartile range of 10. Jeremy said he could not draw just one because he did not know where to put the box on the number line. Do you agree with Jeremy? Why or why not?
Answer:
Jeremy is correct since a box with a width of 10 could be drawn anywhere between the minimum and maximum values.

Question 1.
The box plot below summarizes the maximum speeds of certain kinds of fish.

Question 2.
Suppose the interquartile range for the number of hours students spent playing video games during the school week was 10. What do you think about each of the following statements? Explain your reasoning.

a. About half of the students played video games for 10 hours during a school week.
Answer:
This may not be correct, as you know the width of the interval that contains the middle half of the times was 10, but you do not know where it starts or stops. You do not know the lower or upper quartile.

b. All of the students played at least 10 hours of video games during the school week.
Answer:
This may not be correct for the same reason as in part (a).

c. About half of the class could have played video games from 10 to 20 hours a week or from 15 to 25 hours.
Answer:
Either could be correct, as the only information you have is the IQR of 10, and the statement says ‘could be,” not “is.”

a. Think of a context for which these numbers might make sense.
Answer:
Answers will vary. For example, one possibility is the number of calories in a serving of fruit.

b. Sketch a box plot.
Answer:

c. Are there more data values above or below the median? Explain your reasoning.
Answer:
The number of data values on either side of the median should be about the same: one-half of all of the data.

Question 4.
The speeds for the fastest dogs are given in the table below. 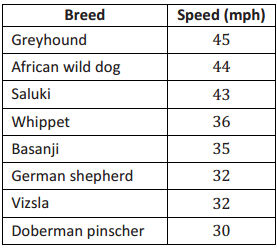 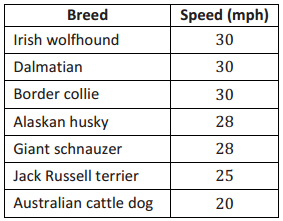 a. Find the five-number summary for this data set and use it to create a box plot of the speeds.
Answer:

Question 1.
Given the following information, create a box plot, and find the IQR.
For a large group of dogs, the shortest dog was 6 inches, and the tallest was 32 inches. One-half of the dogs were taller than 18 inches. One-fourth of the dogs were shorter than 15 inches. The upper quartile of the dog heights was 23 inches.