Recall that in Lesson 3, Robert, a sixth-grader at Roosevelt Middle School, investigated the number of hours of sleep sixth-grade students get on school nights. Today, he is to make a short report to the class on his investigation. Here is his report.

“I took a survey of twenty-nine sixth-graders, asking them, ‘How many hours of sleep per night do you usually get when you have school the next day?’ The first thing I had to do was to organize the data. I did this by drawing a dot plot. Looking at the dot plot, I would say that a typical amount of sleep is 8 or 9 hours.”

Dot plot of number of hours of sleep

Michelle is Robert’s classmate. She liked his report but has a really different thought about determining the center of the number of hours of sleep. Her idea is to even out the data in order to determine a typical or center value.

She then asks each of the ten students to connect their cubes in a stack and put their stacks on a table to compare them. She then has them share their cubes with each other until they all have the same number of cubes in their stacks when they are done sharing.

Exercise 4.
Noting that each cube represents one hour of sleep, interpret your answer to Exercise 3 in terms of number of hours of sleep. What does this number of cubes in each stack represent? What is this value called?
Answer:
If all ten students slept the same number of hours, it would be 9 hours. The 9 cubes for each stack represent the 9 hours of sleep for each student if this was a fair share. This value is called the mean.

Exercise 5.
Suppose that the student who told Michelle he slept 7 hours changes his data value to 8 hours. What does Michelle’s procedure now produce for her center of the new set of data? What did you have to do with that extra cube to make Michelle’s procedure work?
Answer:
The extra cube must be split into 10 equal parts. The mean is now 9\(\frac{1}{10}\).

Example 2:
Suppose that Robert asked five sixth graders how many pets each had. Their responses were 2, 6, 2, 4, 1. Robert showed the data with cubes as follows: 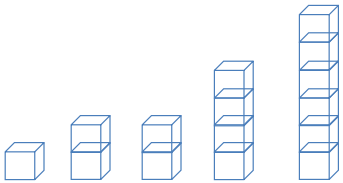 Robert wants to illustrate Michelle’s fair share method by using dot plots. He drew the following dot plot and said that it represents the result of the student with six pets sharing one of her pets with the student who has one pet.

Robert also represented the dot plot above with cubes. His representation is shown below.

Now, continue distributing the pets based on the following steps.

Exercise 7.
Robert does a fair share step by having the student with five pets share one of her pets with one of the students with two pets.

a. Draw the cubes representation that shows the result of this fair share step.
Answer:

b. Draw the plot that shows the result of this fair share step.
Answer:

a.
Draw the cubes representation that shows the result of this fair share step.
Answer:

b.
Draw the dot plot that shows the result of this fair share step.
Answer:

a. Draw the cubes representation that shows the resuft of this final fair share step.
Answer:

b. Draw the dot plot representation that shows the result of this final fair share step.
Answer:

Exercise 10.
Explain in your own words why the final representations using cubes and a dot plot show that the mean number of pets owned by the five students is 3 pets.
Answer:
The shoring method produces 3 pets for each of the fwe students. The cubes representation shows that after sharing, each student has a fair share of three pets. The dot plot representation should have all of the data points at the same point on the number line, the mean. In this problem, the mean number of pets is 3 for these five students, so there should be five dots above 3 on the horizontal scale.

Question 1.
A game was played where ten tennis balls are tossed into a basket from a certain distance. The numbers of successful tosses for six students were 4, 1, 3, 2, 1, 7.

a. Draw a representation of the data using cubes where one cube represents one successful toss of a tennis ball into the basket.
Answer:

Question 2.
Find the mean number of successful tosses for this data set using the fair share method. For each step, show the cubes representation and the corresponding dot plot. Explain each step in words in the context of the problem. You may move more than one successful toss in a step, but be sure that your explanation is clear. You must show two or more steps.

Answer:
Clearly, there are several ways of getting to the final fair share cubes representation where each of the six stacks contains three cubes. Ideally, students move one cube at a time since, for many students, the leveling is seen more easily in that way. If a student shortcuts the process by moving several cubes at once, that is okay, as long as the graphic representations are correctly done and the explanation is dear. The table below provides one possible representation. 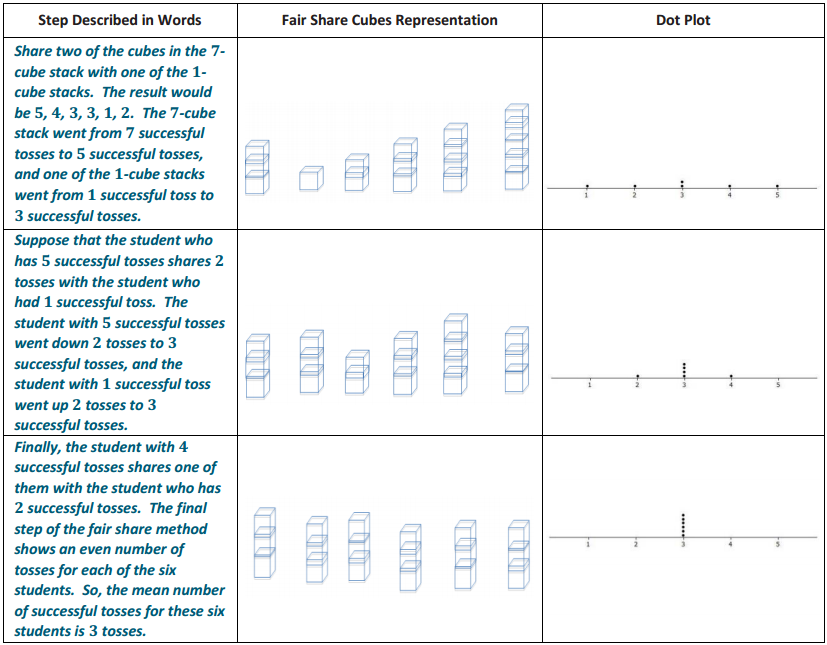 Question 3.
The numbers of pockets in the clothes worn by four students to school today are 4, 1, 3, and 6. Paige produces the following cubes representation as she does the fair share process. Help her decide how to finish the process now that she has stacks of 3, 3, 3, and 5 cubes. 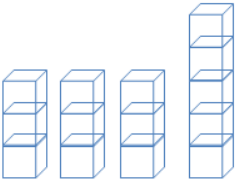 b. Describe the dot plot representation of the fair share mean of 14 chocolate chips in 30 cookies.
Answer:
Answers will vary. There should be 30 different dots on the dot plot, all of them stacked up at 14.

b. Interpret the value from part (a) in terms of the fair share mean length.
Answer:
If each of the 15 radish seedlings were to have the same length, each would have a length of 12\(\frac{2}{15}\) mm.
Note:
Students should realize what the cubes representation for these data would look like but also realize that it may be a little cumbersome to move cubes around in the fair share process. Ideally, they would set up the initial cubes representation and then use the mathematical approach of summing the lengths to be 182 mm, which by division (distributed evenly to 15 plant) would yield 12\(\frac{2}{15}\) mm as the fair share mean length.

Question 2.
Suppose that your school’s soccer team has scored a mean of 2 goals in each of 5 games.

a. Draw a representation using cubes that display that your school’s soccer team has scored a mean of 2 goals in each of 5 games. Let 1 cube stand for 1 goal.
Answer:

Answers will vary. There should be 10 total cubes that are placed in no more than 5 different stacks. One possibility is the one shown here, where each of the 5 stacks contains 2 cubes. However, any set of stacks where 10 cubes are divided into 5 or fewer (assuming that a “missing stack” represents a game in which 0 goals were scored) stacks would have o fair shore (mean) of 2 and would be an acceptable representation.

b. Draw a dot plot that displays that your school’s soccer team has scored a mean of 2 goals in each of 5 games.
Answer:

Answers will vary. One possibility ¡s the one shown here where all five dots are at 2. However, any dot plot that has exactly 5 dots and for which the sum of the values represented by the dot Is 10 would be an acceptable representation of a data set that has a mean of 2.