Example 2.
Simulation provides an estimate for the probability that a family of three children would have three boys or three girls by performing three tosses of a fair coin many times. Each sequence of three tosses is called a trial. If a trial results in either HHH or TTT, then the trial represents all boys or all girls, which is the event that we are interested in. These trials would be called a success. If a trial results in any other order of H’s and T’s, then it is called a failure.

Example 3: Basketball Player
Suppose that, on average, a basketball player makes about three out of every four foul shots. In other words, she has a 75% chance of making each foul shot she takes. Since a coin toss produces equally likely outcomes, it could not be used in a simulation for this problem.

Instead, a number cube could be used by specifying that the numbers 1, 2, or 3 represent a hit, the number 4 represents a miss, and the numbers 5 and 6 would be ignored. Based on the following 50 trials of rolling a fair number cube, find an estimate of the probability that she makes five or six of the six foul shots she takes. 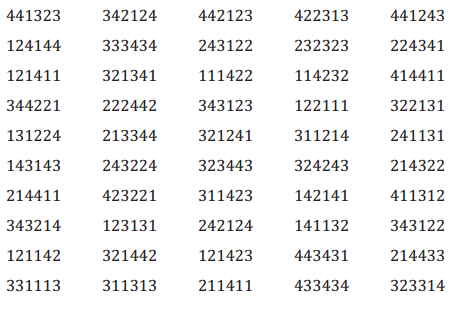 Exercise 2.
Suppose that one card is drawn from a regular deck of cards. A red card (R) simulates a boy birth, and a black card (B) simulates a girl birth. Describe how a family of three children could be simulated.
Answer:
The key response has to include the drawing of three cards with replacement. If a card is not replaced and the deck shuffled before the next card is drawn, then the probabilities of the genders have changed (ever so slightly, but they are not 50/50 from draw to draw). Simulating the genders of three children requires three cards to be drawn
with replacement.

Exercises 3–5
Exercise 3.
Find an estimate of the probability that a family with three children will have exactly one girl using the following outcomes of 50 trials of tossing a fair coin three times per trial. Use H to represent a boy birth and T to represent a girl birth.

Answer:
T represents a girl. I went through the list, counted the number of times that HHT, HTH, or THH appeared and divided that number of successes by 50. The simulated probability is \(\frac{16}{50}\), or 0.32

Exercise 4.
Perform a simulation of 50 trials by rolling a fair number cube in order to find an estimate of the probability that a family with three children will have exactly one girl.
a. Specify what outcomes of one roll of a fair number cube will represent a boy and what outcomes will represent a girl.
b. Simulate 50 trials, keeping in mind that one trial requires three rolls of the number cube. List the results of your 50 trials.
c. Calculate the estimated probability.
Answer:
Answers will vary. For example, students could identify a girl birth as 1, 2, 3 outcome on one roll of the number cube and roll the number cube three times to simulate three children (one trial). They need to list their 50 trials. Note that an outcome of 412 would represent two girls, 123 would represent three girls, and 366 would represent one girl, as would 636 and 663. Be sure that they are clear about how to do all five steps of the simulation process.

Question 1.
A mouse is placed at the start of the maze shown below. If it reaches station B, it is given a reward. At each point where the mouse has to decide which direction to go, assume that it is equally likely to go in either direction. At each decision point 1, 2, 3, it must decide whether to go left (L) or right (R). It cannot go backward. 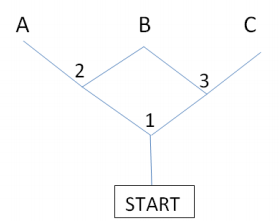 a. Create a theoretical model of probabilities for the mouse to arrive at terminal points A, B, and C.
i) List the possible paths of a sample space for the paths the mouse can take. For example, if the mouse goes left at decision point 1 and then right at decision point 2, then the path would be denoted LR.
ii) Are the paths in your sample space equally likely? Explain.
iiii) What are the theoretical probabilities that a mouse reaches terminal points A, B, and C? Explain.

b. Based on the following set of simulated paths, estimate the probabilities that the mouse arrives at points A, B, and C. 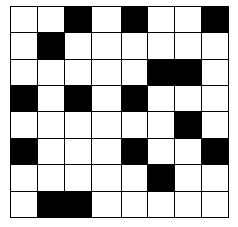 a. For one throw of a dart, what is the probability of winning a point? Note that a point is won if the dart lands on a black square.
b. Lin wants to use a number cube to simulate the result of one dart. She suggests that 1 on the number cube could represent a win. Getting 2, 3, or 4 could represent no point scored. She says that she would ignore getting a 5 or 6. Is Lin’s suggestion for a simulation appropriate? Explain why you would use it, or if not, how you would change it.
c. Suppose a game consists of throwing a dart three times. A trial consists of three rolls of the number cube. Based on Lin’s suggestion in part (b) and the following simulated rolls, estimate the probability of scoring two points in three darts. 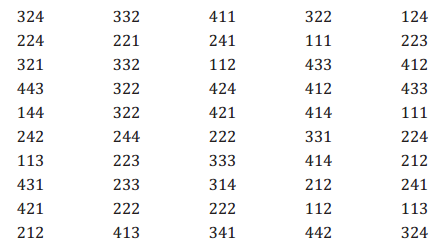 Question 1.
Nathan is your school’s star soccer player. When he takes a shot on goal, he typically scores half of the time. Suppose that he takes six shots in a game. To estimate the probability of the number of goals Nathan makes, use simulation with a number cube. One roll of a number cube represents one shot.
a. Specify what outcome of a number cube you want to represent a goal scored by Nathan in one shot.
b. For this problem, what represents a trial of taking six shots?
c. Perform and list the results of ten trials of this simulation.
d. Identify the number of goals Nathan made in each of the ten trials you did in part (c).
e. Based on your ten trials, what is your estimate of the probability that Nathan scores three goals if he takes six shots in a game?
Answer:
a. Answers will vary; students need to determine which three numbers on the number cube represent scoring a goal.
b. Rolling the cube six times represents taking six shots on goal or 1 simulated trial.
c. Answers will vary; students working in pairs works well for these problems. Performing only ten trials is a function of time. Ideally, many more trials should be done. If there is time, have the class pool their results.
d. Answers will vary.
e. Answers will vary; the probability of scoring per shot is \(\frac{1}{2}\).

Question 2.
Suppose that Pat scores 40% of the shots he takes in a soccer game. If he takes six shots in a game, what would one simulated trial look like using a number cube in your simulation?
Answer:
Students need to realize that 40% is 2 out of 5. In order to use the number cube as the device, 1 and 2 could represent goals, while 3, 4, and 5 could represent missed shots, and 6 is ignored. Rolling the number cube six times creates 1 simulated trial.