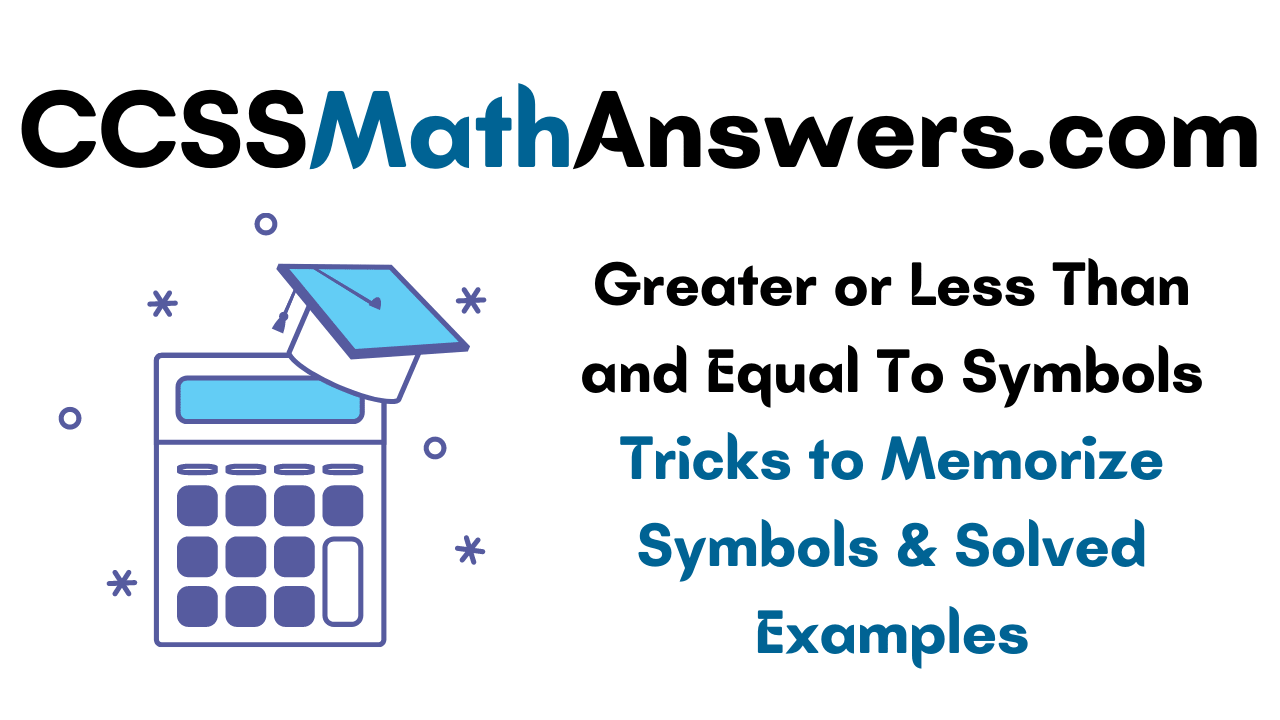 In mathematics, symbols play a major role in calculating various concepts. Greater or Less Than and Equal To aid in your preparation and make you understand how one number is separate from another number. If the value of one numeric is larger or smaller than the value of another numeric or both the numeric is equal then you can compare them easily by using the symbols of greater than, less than, and equal to. Let’s discuss deeply on this topic in this article. Dive into the below modules and grasp the whole concept of Greater or Less than and equal to signs.

Greater Than or Less Than and Equal To Signs

The symbol for greater than is “ >” and for less than is “<”. Get more math symbols here with us.

In maths, the greater than symbol is located between two numbers in which the first value is larger than the second value. The symbol for greater than is “>”. For example, 34 > 23. Here 34 is greater than 23.

The Less than sign is placed between two numbers for comparison. If the first value is smaller than the second value then the symbol less than is used like this “<“. ie., smaller number < bigger number. For instance, 27 is less than 40, so we write it like 27<40.

The symbol of Equal To is applied to show the equality in two given numerics. This equal to sign is opposite to both greater than and less than signs. Not only for equality between two values also use this sign for writing the equations. The indication of the Equal To sign seems like “=”. Illustration: If P = 10 and Q = 10, then P = Q.

Trick to Memorize Greater Than & Less Than Signs

5 > 4: Five is greater than Four, so the large opening of the rotated V symbol faces five and the tip of the V faces four.

3 < 9: Three is less than Nine, where the tip end faces the three and larger side points the nine.

Bigger number > Smaller number: This sign here is greater than

Smaller number < Bigger number: This sign here is less than

Also, there are two more tricks that you can remember the greater than less than symbols easily. They are,

Below is the table that helps students to understand all the symbols briefly:

Jasmin had 10 stones, let’s assume the scenarios and find out how many she has now:

She should have less than 10

Still, she has some stones we can say

If Jasmin could have lost all her stones we would say

Simply, the number of stones is greater than or equal to zero.

4. Dolly has Ten bananas and Maneesha has six bananas. Find out who has more bananas.