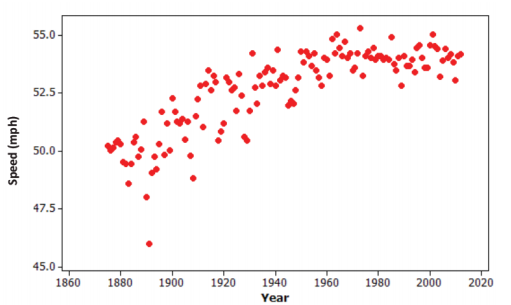 Data Source: http://www.kentuckyderby.com/
(Note: Speeds were calculated based on times given on website.)
a. Is the association between speed and year positive or negative? Give a possible explanation in the context of this problem for why the association behaves this way considering the variables involved.
Answer:
The association is positive overall, as horses have been getting faster over time. This is perhaps due to improved training methods.

b. Comment on whether the association between speed and year is approximately linear, and then explain in the context of this problem why the form of the association (linear or not) makes sense considering the variables involved.
Answer:
The association is not linear. There is probably a physical limit to how fast horses can go that we are approaching.

c. Circle an outlier in this scatter plot, and explain, in context, how and why the observation is unusual.
Answer:
The winner that year was much slower than we could have predicted. 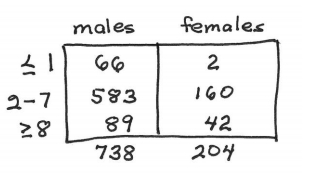 b. Do these data suggest an association between gender and frequency of hand washing? Support your answer with appropriate calculations.
Answer:

Question 3.
Basketball players who score a lot of points also tend to be strong in other areas of the game such as number of rebounds, number of blocks, number of steals, and number of assists. Below are scatter plots and linear models for professional NBA (National Basketball Association) players last season. 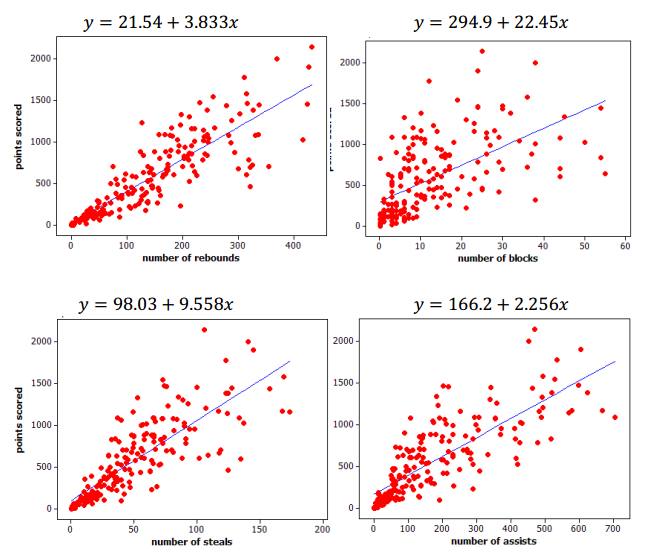 b. The equations on the previous page all show the number of points scored (y) as a function of the other variables. An increase in which of the variables (rebounds, blocks, steals, and assists) tends to have the largest impact on the predicted points scored by an NBA player?
Answer:
Each additional block corresponds to 22.45 more points, the largest slope or rate of increase.

c. Which of the four linear models shown in the scatter plots on the previous page has the worst fit to the data? Explain how you know using the data.
Answer:
Probably number of blocks because the association is weaker. There is more scatter of the points away from the line.